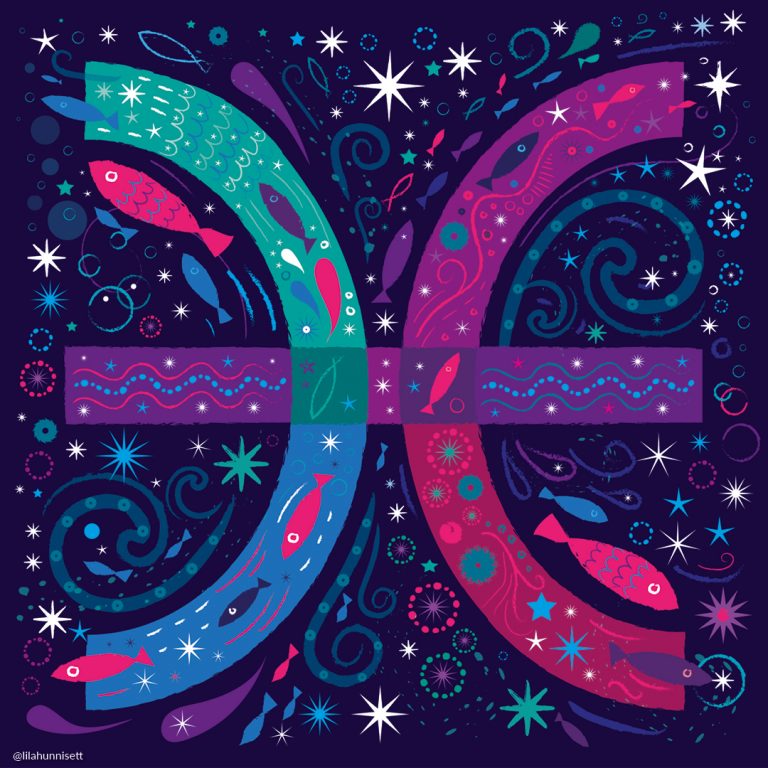 Hello! For my first post in eons, I’ve decided to post some of my astrological artwork. I know many people are dismissive of the subject, but I find the symbolism beautiful and love to get lost in the mythology – it makes for gorgeous inspiration. So I decided to create some astro artwork based on the mythology and archetypes. My first one is Pisces. As a Pisces sun myself, I found it easy to tap into the pisces vibe!

The glyph symbol for Pisces (♓︎) represents two fish – joined to each other, swimming in opposite directions, and I have used this as the basis for my work. The word Pisces is latin for “fish”.

There are lots of entrancing mythologies related to the sign, but one ancient Greek legend links the sign of Pisces to koi fish, which the gods Aphrodite (Venus) and Eros (Cupid, her son) changed themselves into to escape Typhon, the monster. Typhon had been summoned by Gaia to attack them.

It is a mutable water sign ruled by Jupiter in traditional astrology (although some modern astrologers assign Neptune (discovered in 1846) as ruler or co-ruler). Jupiter’s traditional colours include purple, hence using here. Blues and aquas also help to get across the water sign symbolism and relate back to the mythology of the fish and sea.

The sign of Pisces has complex layers and levels of meaning but part of its symbolism can be understood by looking at its seasonal context. It falls at the end of winter, on the cusp of spring, when the frozen waters are starting to melt and move again. The seasons are each represented by three signs, the first being cardinal (for winter this is Capricorn), secondly a fixed sign (in winter this is Aquarius) and the final signs of each season are mutable (for winter, Pisces). Cardinal signs have an initiatory quality, they are the beginning of something, fixed signs falling in the middle of a season have a more fixed nature, more stable, because represent the main part of a season whereby it is more established. But mutable signs like Pisces are more about the shifting from one thing (or season) into another (in this case into spring), so about both endings but a preparation for a transition for a new phase (other mutable signs include Virgo (which falls at the end of summer) and Sagittarius (which comes at the end of Autumn before Winter).

As the feminine, yin home of Jupiter, Pisces is about looking inwards, dreams, intuition (rather than the more yang outward expression of Jupiter, which can be seen through its other home sign of Sagittarius). I tried to get these themes across in my design, and I hope I’ve been successful.

A good friend told me some mythologies describe Pisces as the salmon. Although it is a humble fish it makes the most intrepid journey from the ocean to fresh water to lay its eggs there. This journey can be up to 1000 miles, sometimes leaping and jumping upstream via waterfalls and rapids. So please do not write off a Pisces as a flakey type as we can undertake big intrepid journeys and are much stronger than you might realise! :). The symbolism of Pisces, reflected through the salmon, therefore also refers to the cycle of mortality, of life and death and everything in between.

I wish you all a wonderful day, and power to all the lovely Pisces out there!

Sign up to get a free mini tarot deck printable!

Subscribe below to keep up to date with new work and news (I promise I won’t email too often!)…. :)

This website uses cookies to improve your experience while you navigate through the website. Out of these, the cookies that are categorized as necessary are stored on your browser as they are essential for the working of basic functionalities of the website. We also use third-party cookies that help us analyze and understand how you use this website. These cookies will be stored in your browser only with your consent. You also have the option to opt-out of these cookies. But opting out of some of these cookies may affect your browsing experience.
Necessary Always Enabled
Necessary cookies are absolutely essential for the website to function properly. This category only includes cookies that ensures basic functionalities and security features of the website. These cookies do not store any personal information.
Non-necessary
Any cookies that may not be particularly necessary for the website to function and is used specifically to collect user personal data via analytics, ads, other embedded contents are termed as non-necessary cookies. It is mandatory to procure user consent prior to running these cookies on your website.
SAVE & ACCEPT